The first the feast of the trumpets has passed – or maybe not? 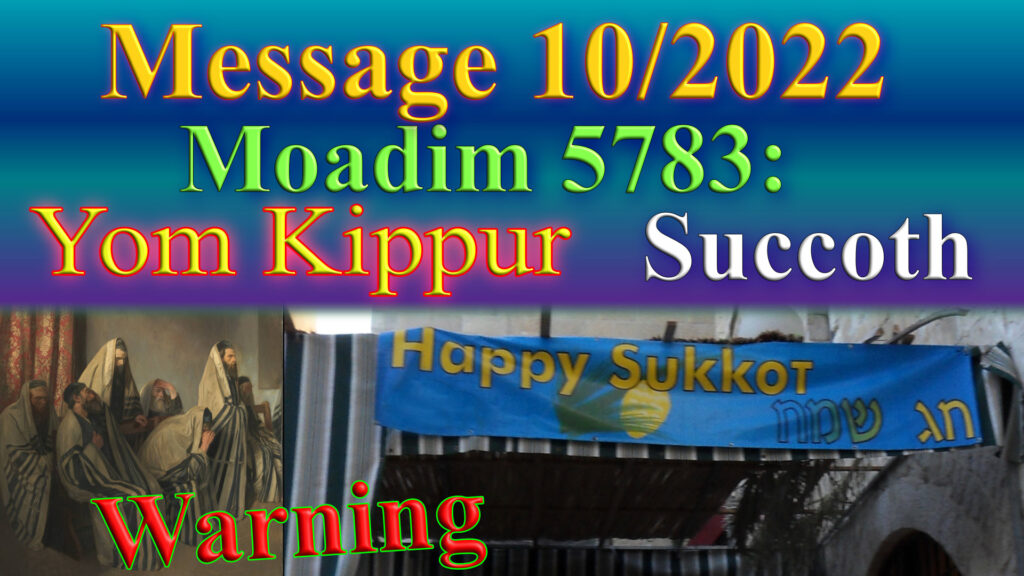 Guess the rapture guys who claimed it to happen between the 25th and 27th even til the 29th or so will surely find a way to explain their errors away.
Yes, I do believe in the rapture but I already made a video a while ago where I mention the day and the hour when it will happen.
And there I mentioned clearly this will occur exactly at the minute and second when the rapture will occur.
Not sooner and not later (period).

However about the Moadim, Yom Truah, that just have passed there is deeper meaning the understanding of ancient Hebrew and the connection to Yom Kippur.

Most people as much as I know only know the day Yom Truah as Rosh HaShanah, or translated the Jewish new year.
Yet again, this is not in scripture.
Rosh HaShanah is basically a rabbinical invention and not really biblical.

Though the literal translation of the name Yom Truah is Day of the Trumpets/ or sounding of the Shofar or the alarm.
The deeper meaning goes a step further.
It means also Day of the warning (by the blast of the Shofar).
I’ve never heard it this way but it makes absolute sense.

Let me go a bit around it:
The next feast in the biblical line is Yom Kippur what in English is usually translated as the day of atonement.
Literally it should be Yom HaKippurim (which is plural) And that means Day of the atonements.
Atonement not only for one sin but many.
Maybe you sin only once a year but I find myself going against Adonais commandments several times every day.
But I don’t want to split hairs on theology.
However,
I could clearly see, Yom Truah is not a feast for itself but connects to Yom Kippur.

Traditional and even in scriptural understanding the last Shofar blast on Yom Truah is always
a looooong blast, just as long someone can blow.
Some people make it 5 or 10 seconds, others might be able to hold it for maybe a minute.

But I felt it so strong in the spirit that the last blast is a sound in the spiritual realm that will last until Yom Kippur.
It is known that angels don’t need to breathe, so they can blow the Shofar as long as necessary – and in this case no problem for them to blow it for around a week according to human time.

For us, we may need a compressor plugged in to our lungs to blow it that long and hope we won’t have a blackout on electricity that the compressor fails.
But the other issue might occur, we may get a bit tooooo hungry and thirsty.
And while blowing the Shofar we can’t eat.
Maybe some know how to eat through their nose, me not.
But surely even professional trumpet players might experience the blasting of the lips before they reach Yom Kippur if they blow non-stop for a week.

About a week of warning in the spiritual realm – could it be?
I feel yes!
A warning to repent and turn to the Father in heaven to obey His commandments and so on.
I think we can’t have enough warnings to get our house, our lives in order.

Whether the Lord will fetch His bride… today or in several years – tomorrow is not promised to anyone.

Are you preparing yourself with the warning to humble yourself towards Yom Kippur?
As 2nd chronicles say if we humble ourselves and pray and seek the face of YHWH and turn from out evil ways He will hear from heaven, forgive our sins and heal our land.
Currently it does not look like any nation is doing that.
But who knows… time will tell how things may turn.

So then after Yom Kippur we move into Succoth.
I don’t have a proper place here to build a succah.
But will see, if I can manage to work out something.

If you have the possibility to build a succah, give it a try.
It is not complicated.
Even from a rabbinical viewpoint there is a lot of variables how you want to build it.
Way less regulations on that than on almost all other things.

Only if you live in an area where there are a lot of snakes or other wild animals around it is not the best advice to have an open shelter like a Succah.
In some countries it may get very cold – but there, if you get a good sleeping bag or enough blankets it is doable.
Only during rain it is not great.
I slept the week of Succoth a couple of times during the seasons when I lived in Israel but guess only once in another country when I had the opportunity at the apartment with a nice balcony.
I know several families who do it year after year and especially the children love it the most.
It’s like camping.
Just to get a feeling and it is for remembrance how the Israelite’s lived that way for 40 years in the wilderness.
40 Years is a pretty long time, for most of us.
Even if you’re older.
With 80 it is half the entire life.
However,
at the end of 40 years regardless where you are in your age.
Every time I look back I think, it passed by like nothing.

And so in view of eternity our life and even the 6000 years of humanity is just a speck in time.
Or less than a drop of water in the wide ocean.

So I wish you great blessings in keeping the festivals, the Moadim of YHWH.
Some people think, oh, this is only for the Jews.
But no, it is for all who believe in the scriptures.
It says, we shall not remove or add anything to it.
And all people, the Jews and gentiles are called to keep the Commandments which includes to celebrate the Moadim.
Yeshua kept all of them.
He did not keep in the religious ways like the Pharisees.
Yeshua as was his custom went every Shabat into the Synagogue.
As we shall imitate Yeshua, there is no reason to refuse to keep all the festivals as well to let it be a blessing.

And by saying this I just want to encourage you to test it.
You don’t need to have a 6-7 or 8 hour long service like the Jews in the Synagogues on Yom Kippur.
This is really exhausting, but if you have knees, go down in prayer and add fasting.

Whether you go for the Rabbinical mathematical counting or the new moon sighting counting, whatever doesn’t matter.
But whole day from sunset to sunset in prayer and fasting.
If you can’t fast for medical or whatever reasons, don’t do it unless the Holy Spirit clearly tells you.
We all want to see breakthroughs in so many areas.
Collective prayer and fasting has always been proven to be much more effective than individual prayers, even though this is also needed a lot.
So the rabbinical counting is not a bad idea, since millions are praying an fasting at the same time.
Feel free to keep Yom Kippur on both, the Rabbinical and lunar counting.
We can’t pray enough, especially in this season of madness and insanity all over the world, in the days of Noach.

Links to the Videos on different Platforms – you can decide which one you prefer:
Bitchute

Or watch it directly here on Rumble