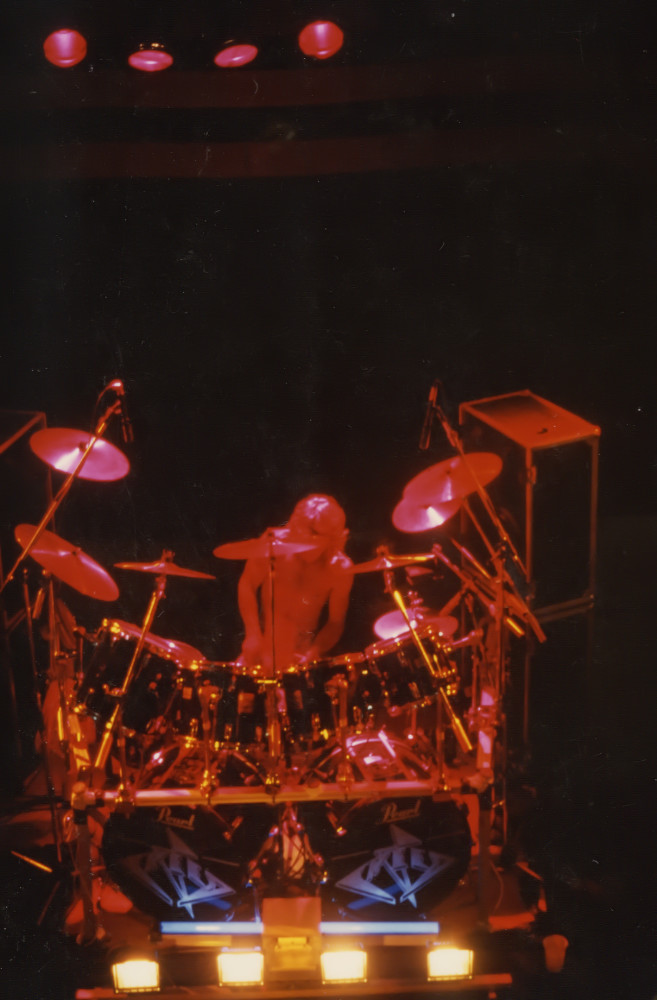 Drums in the section History

Yes, I am still playing a little bit drums but far away of how much I have been playing before.
However, the history is somehow long
I also did not include the images here between the text like I did it with the studio, but in a gallery below. (maybe I’ll do)

The Drum section does not have any audio files
However, audio files from drumsolos you will find in the album “Heartbeat” 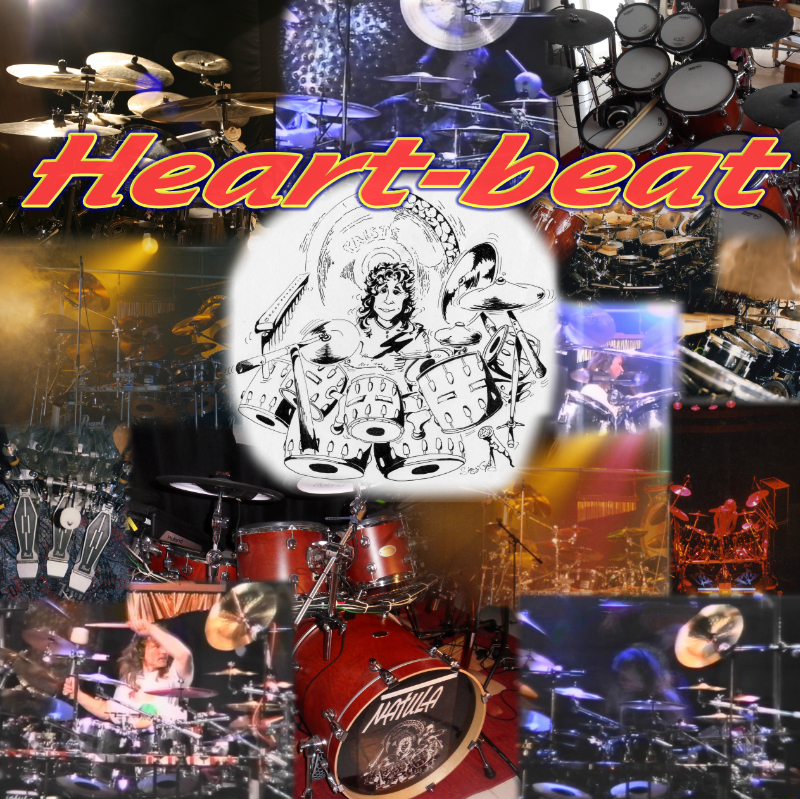 Now the journey:
As a young boy I started with drumming
At the age of 12 I built my own drumset – I don’t have any pictured from that
Then by the age of 15 I’ve saved enough money through the years by distributing newspaper and after a holiday job to buy real drumset. 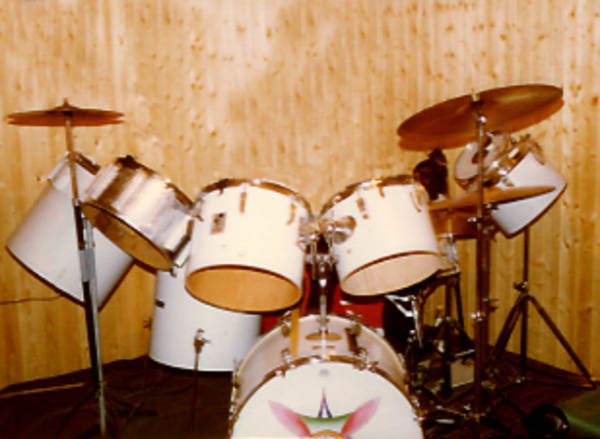 You’ll see in the image the two toms on the left?
These were still from the first hand-built drum, including the hardware (made mostly of metal water pipes).
The only thing I bought were the rim and the skin – but the fittings and the shell, all self-made
I don’t know how I was able to do that,where even the hardware where the toms could be adjusted seamlessly and it was tight.

The rest of the drum is the one I could buy with that money.
It was a Sonor drumset.
Today you can buy such cheap drumsets but at that time in the 70’s every drumset was fairly expensive.
When we say a 1,500$ is not extreme – but….
Comparing the salaries of the 70’s and today you would end up maybe paying 4,000$ or more. And this was one of the cheaper drumsets – but it was good quality and I used it many years.

1986 I was able to buy another drumset from Pearl which was appropriate for the Heavy band Creed with double bassdrum.
Throughout the years I was adding tons of things to that drumset.
I also included electronic pieces and percussion.
All in all it was by far the best drumset I’ve ever had.

And this was not because of the size with the two big china gongs behind.
But the drum from it’s positioning were simply perfect for me.
It had 20″ bassdrums because I don’t like to play so high as I am not so tall.

Of the two pictures below: the one is from a Drumsolo in Aidlingen .
And the right one is the news article about that concert. 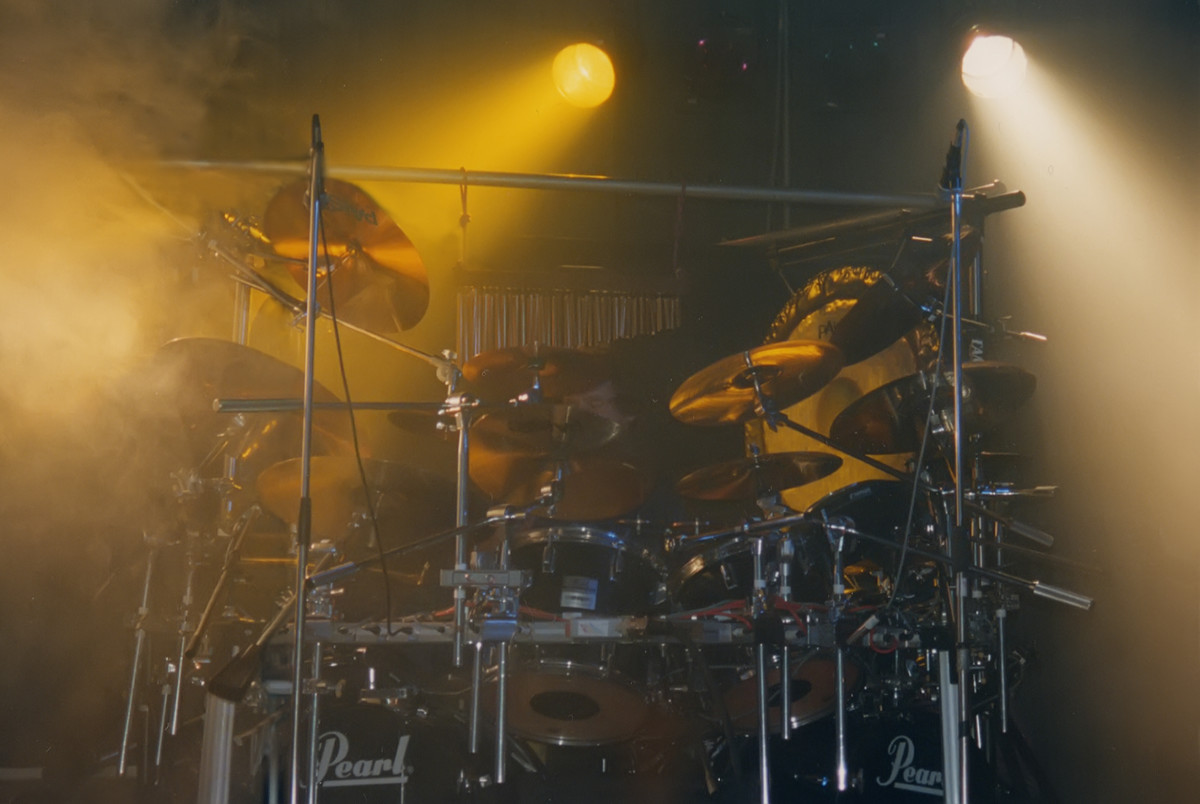 Still talking here now about the Pearl drumset!
That drum received built in microphones (May-System).
Not many drummers liked it, that’s why it never became popular and disappeared some years later.
Can’t remember what microphone heads they had but for that time the standards (good ones).
The only thing drummers didn’t like it because you needed to drill two good size holes into the shell to mount them.
And the microphone inside surely interfere somehow a bit with the resonance…

But!
For live just perfect because it did not cause feedback issues and it gives a very clean setup.
Because no microphone stands around.
I also built into the rack (old square pearl-rack) a multicore.
Also with that only short wired were neccessary to connect the toms into the rack and from there a single multicore to the mixer (or stagebox). 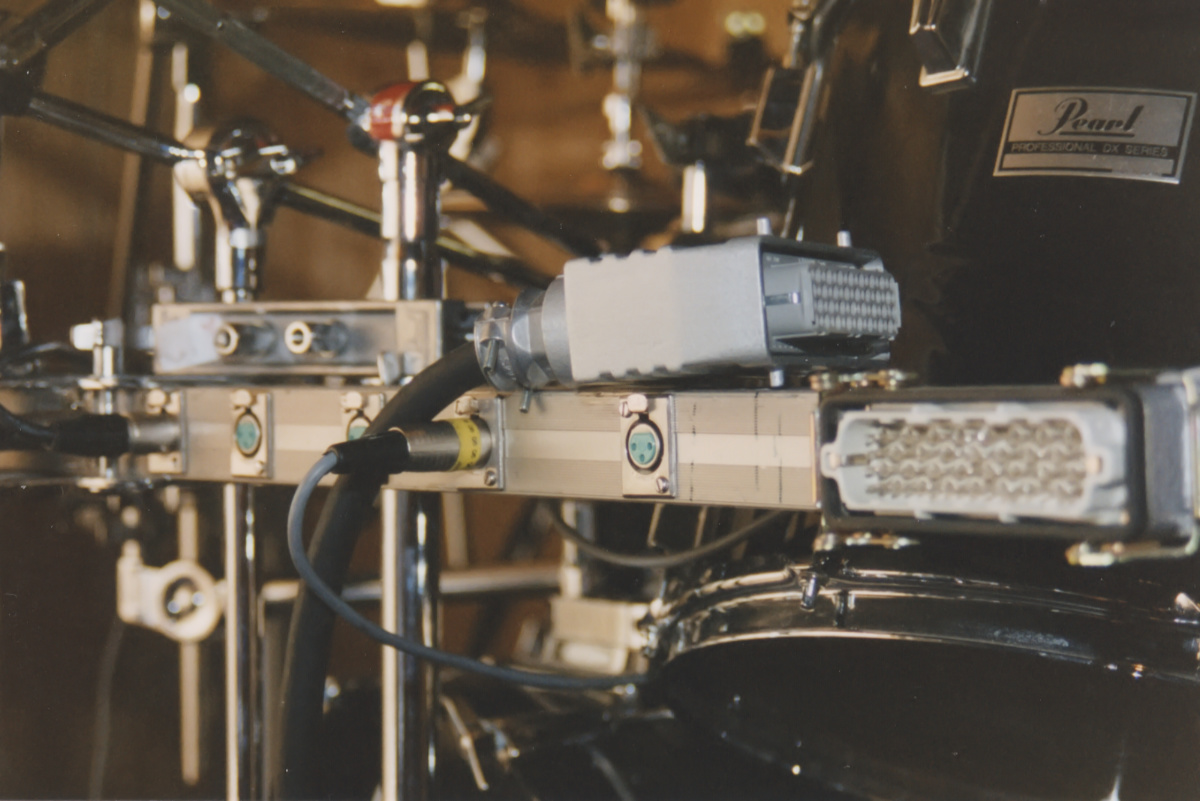 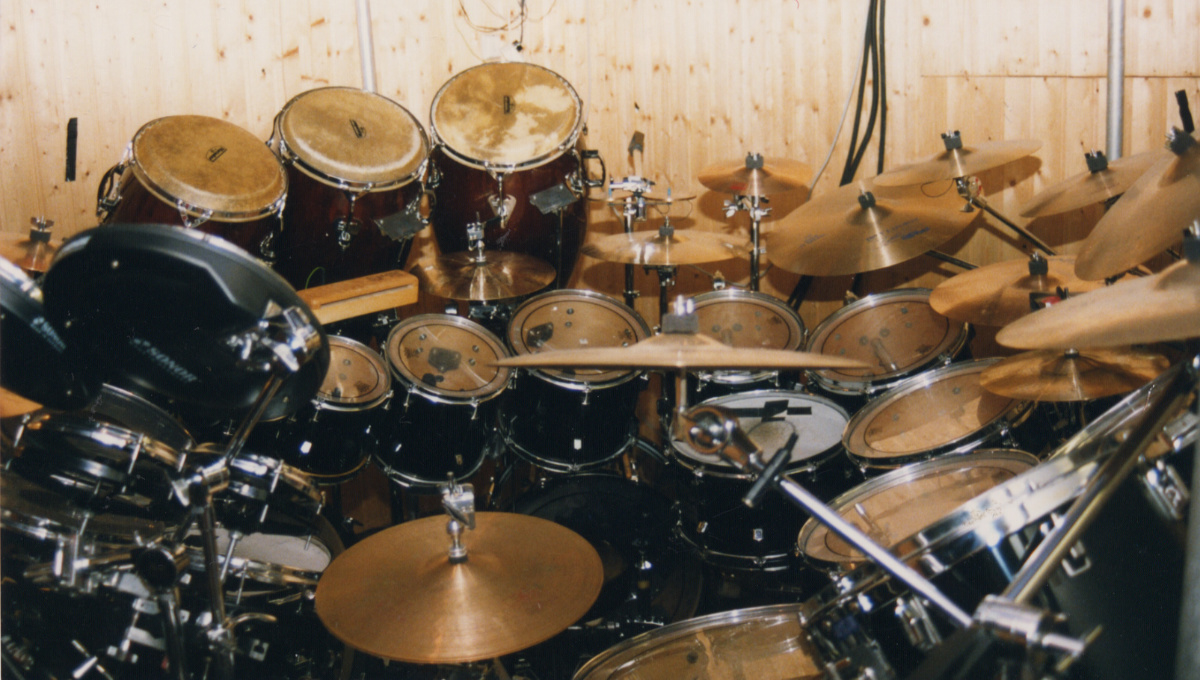 With the rack and the microphone-system I was able to set up the complete huge drumset within 20-25 minutes.
And as I had a pre-mixed sound, only 2 cables to the mixer and adjust the acoustics of the room – done quickly and hassle free…

If I would regret anything in music than this: That I sold that drumset.
Okay, many years later I had to sell it anyway when I left the country and did not have even any storage where I could put it (if not playing).
But I could never find anything even closely comparable to that Pearl drumset with Paiste Cymbals.

Now some images from the Solo at Promikon. 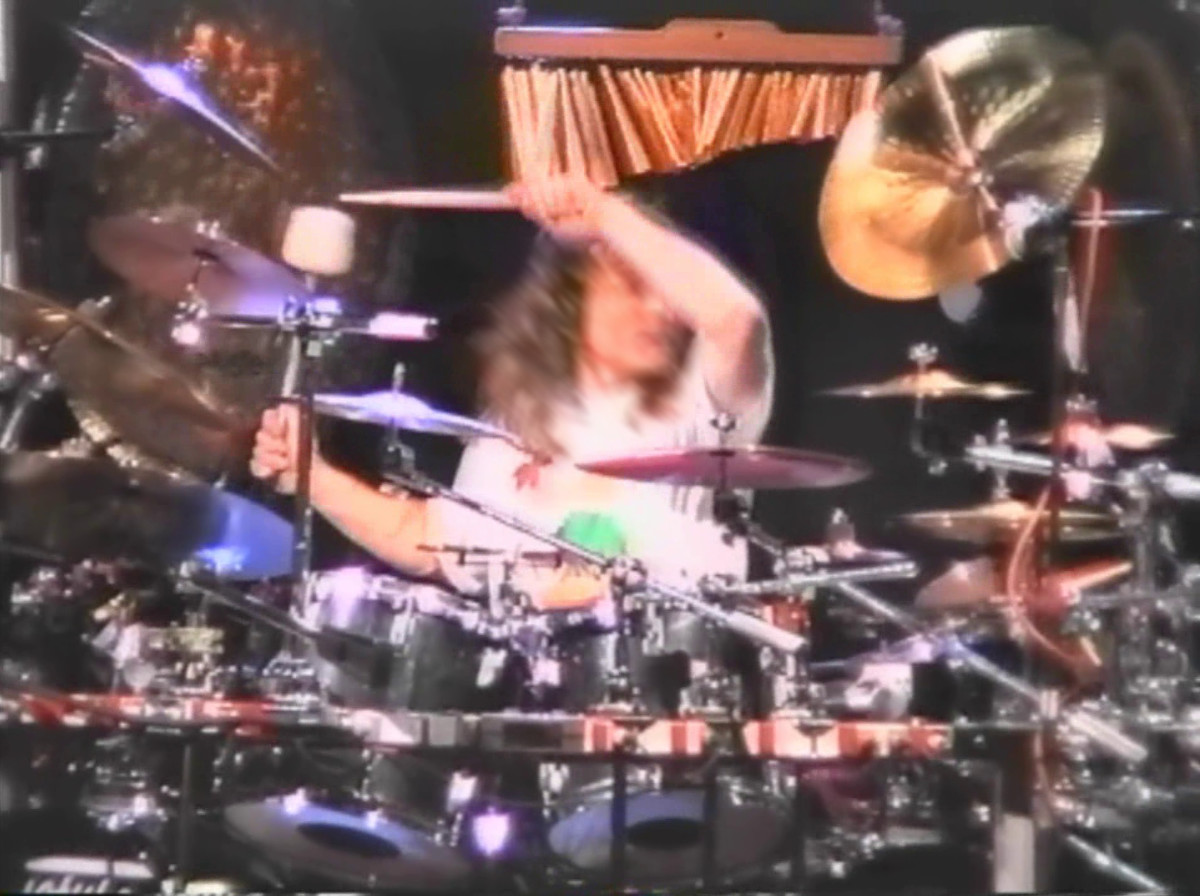 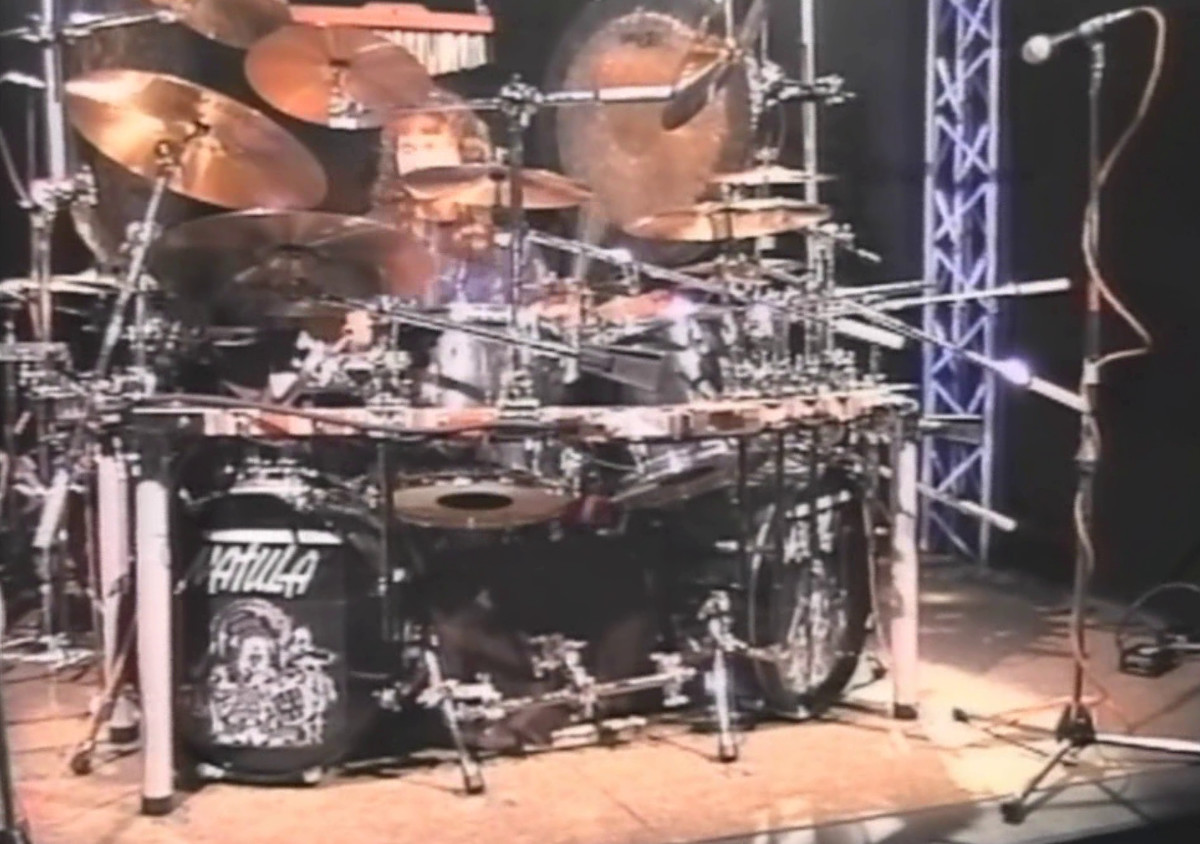 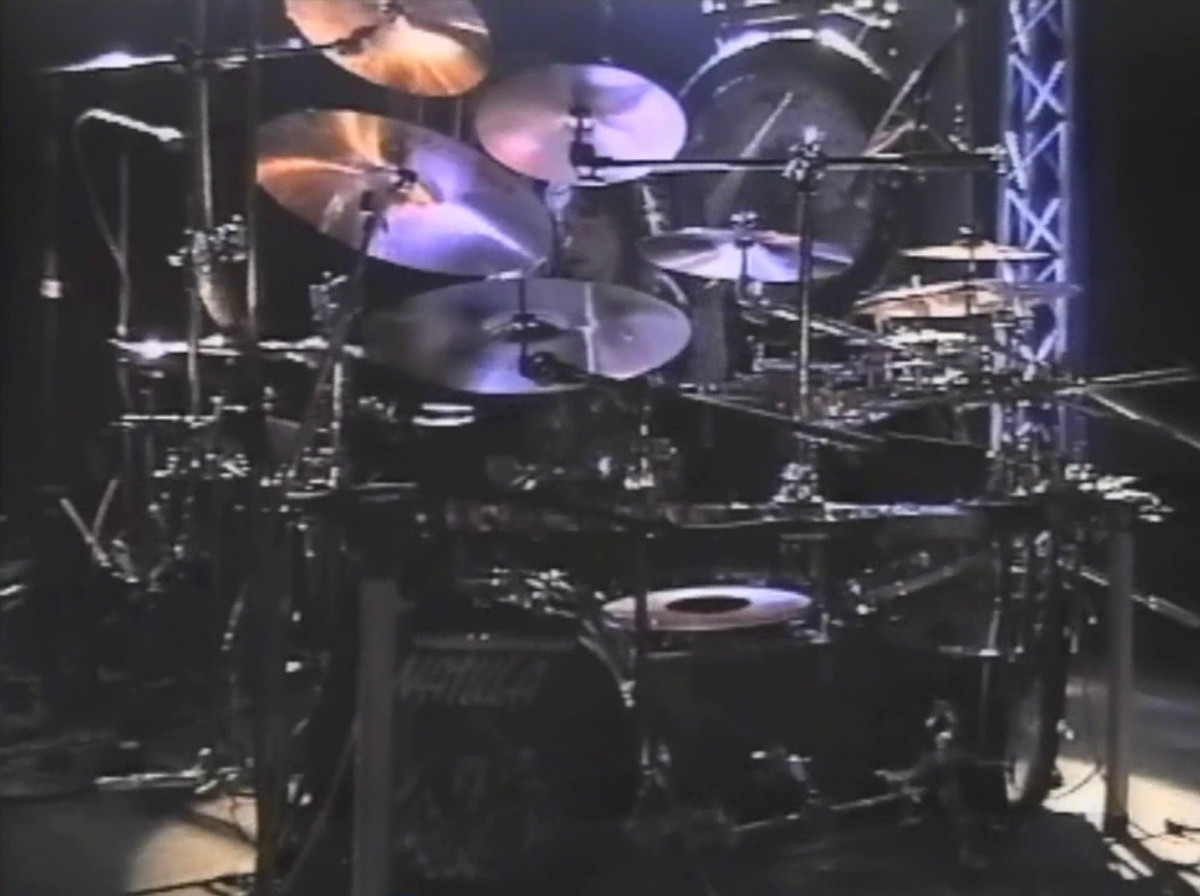 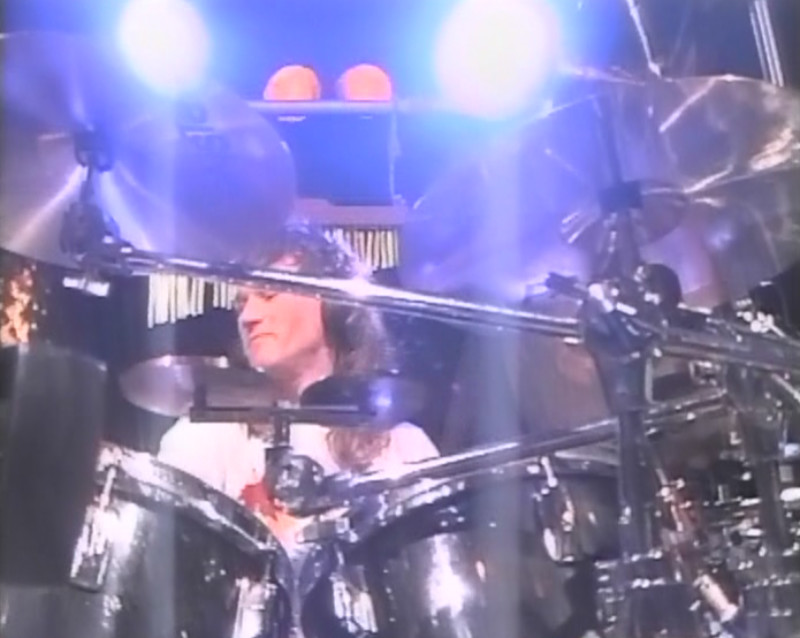 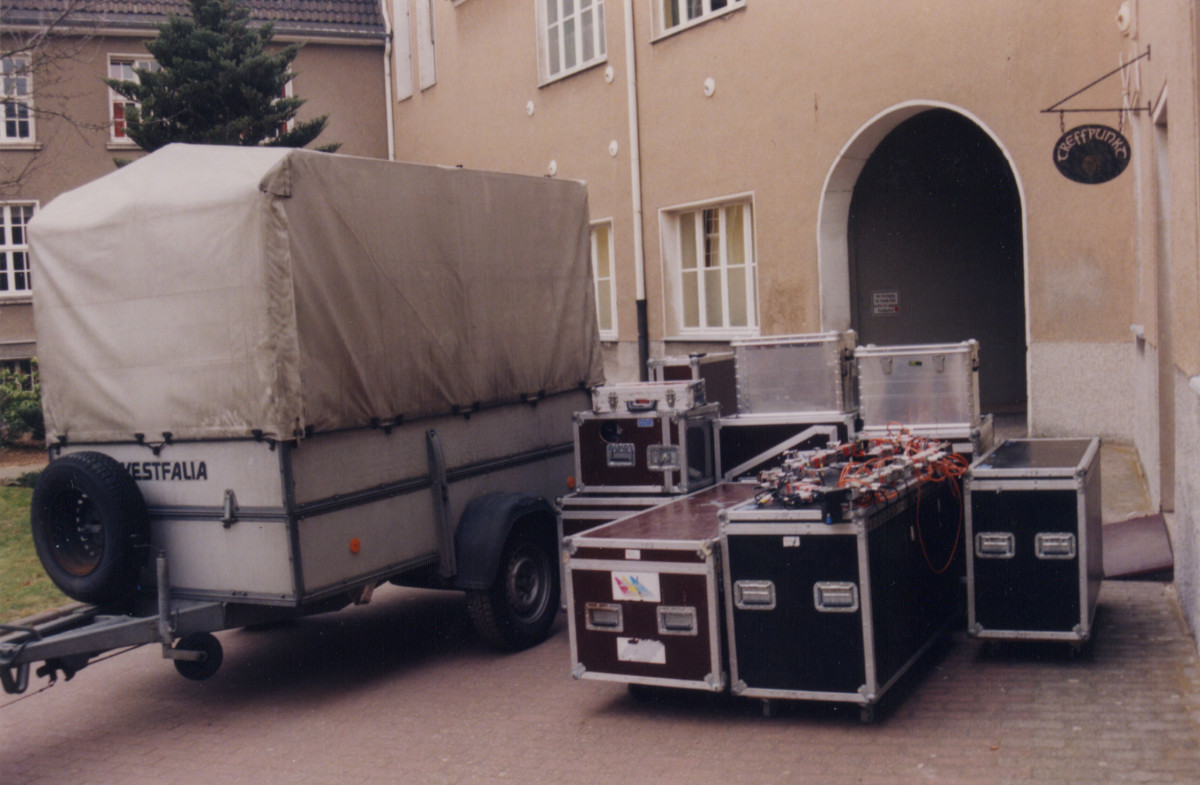 This set was something that became somehow popular in the 70’s
Later it disappeared but now they are back as like the Vinyl records – strange, isn’t it?

I actually modified the hardware to mount it on a Pearl Rack system because I like the sturdy Pearl rack and not so much the Sonor hardware – that was great.
In itself it is a nice eye catcher, especially playing live and lights shining through the set.

However, for me it was not the perfect drumset.
WHY?
With it’s 24″ Bassdrums made it hard to enjoy, because the toms were so high up – but the rest was great. 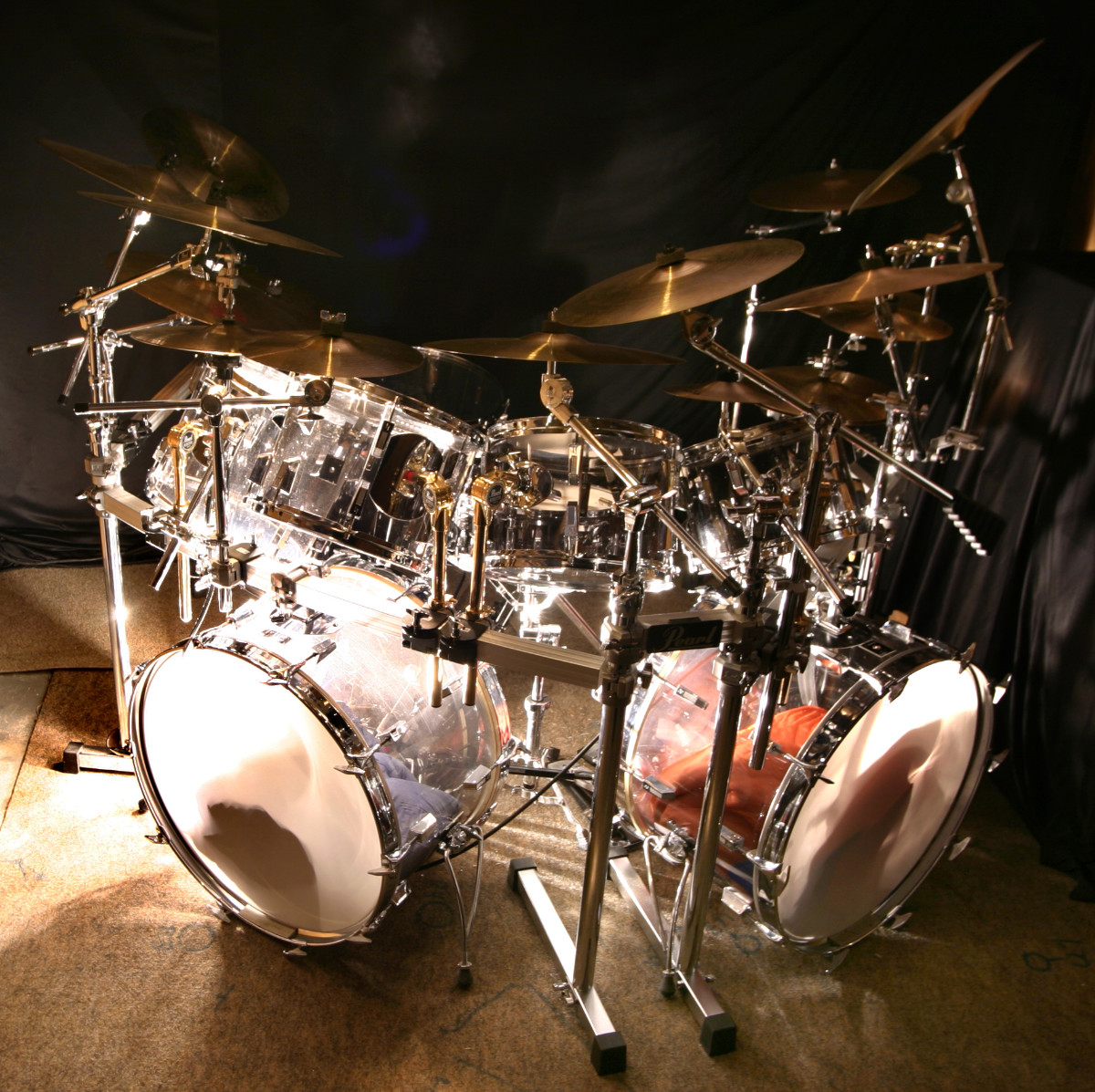 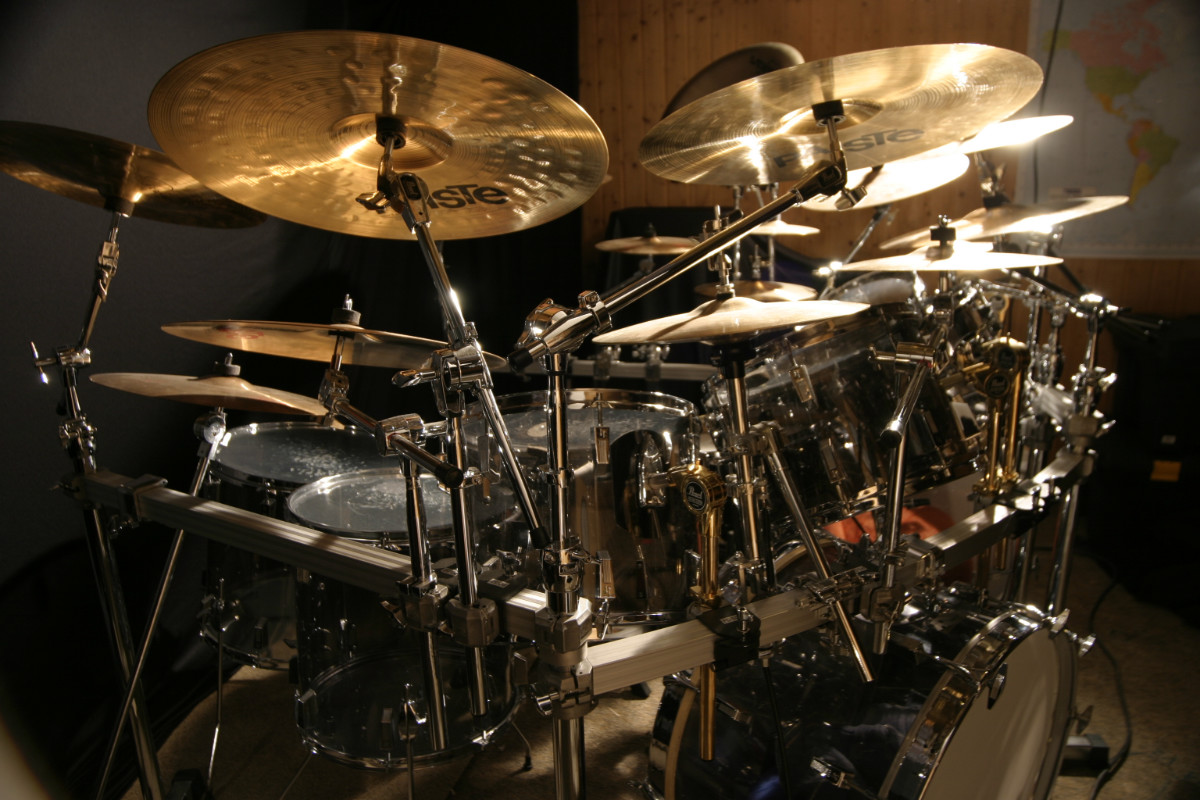 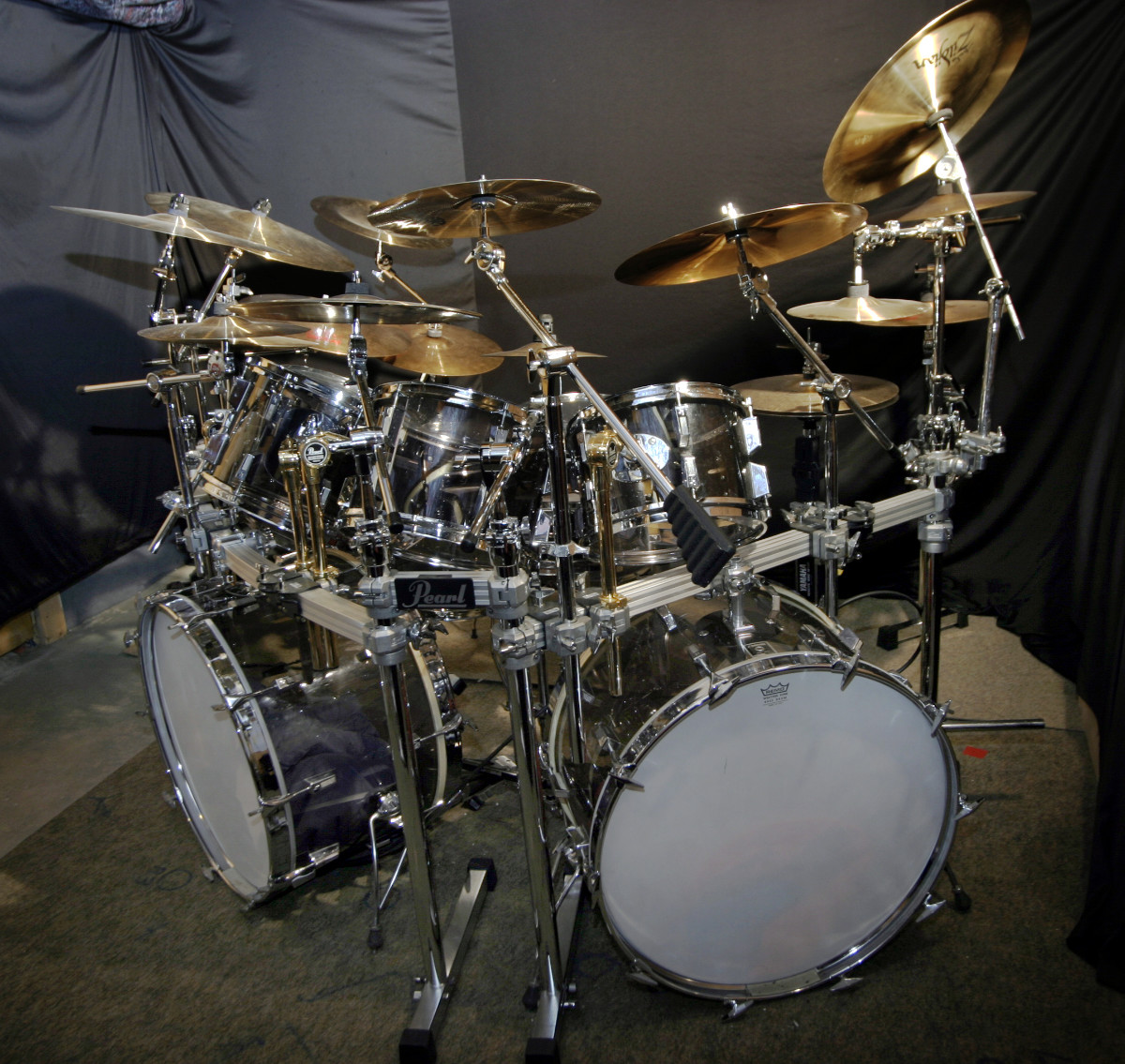 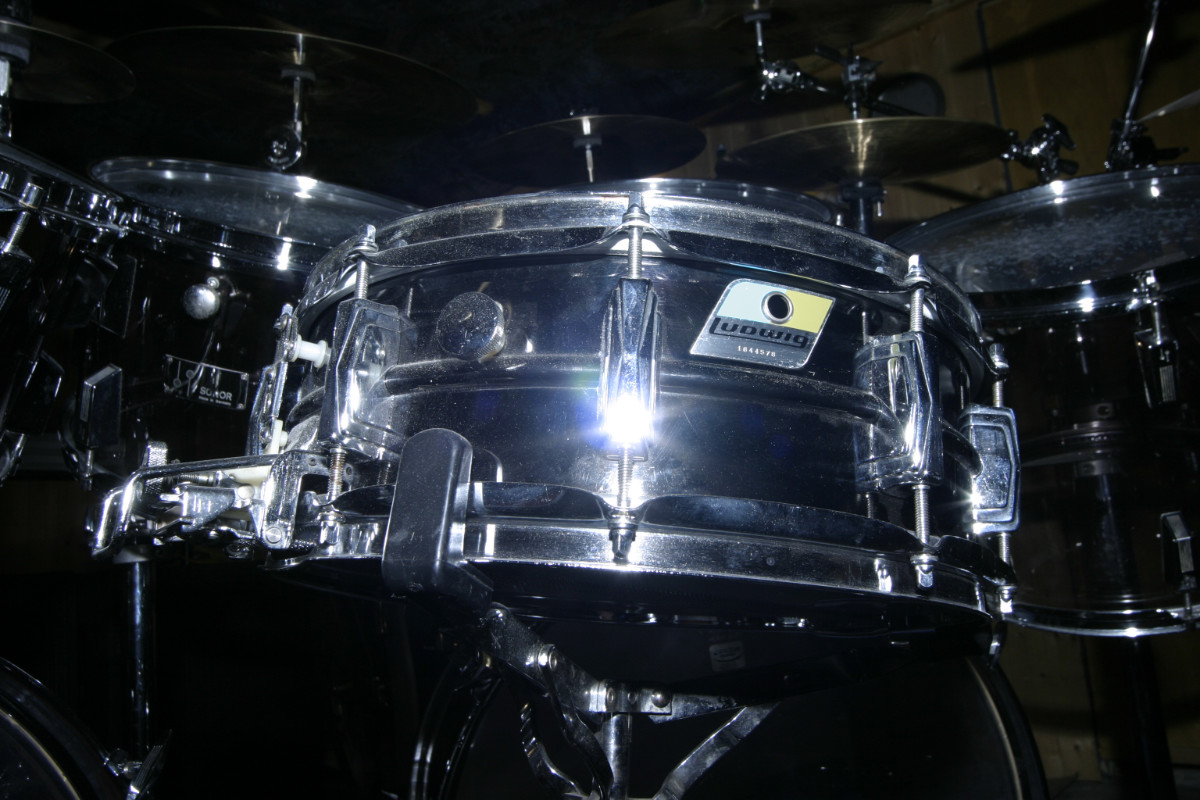 Well, one part of that drumset was unbeatable, but that was not Sonor:
But a “Ludwig Black Beauty Snare”
And this one I had was not one of the re-creation. It was the original.
I found a used one from 1972 in mint condition.
The most beautiful sounding snare I’ver ever heard.

The integrated electronic of the Pearl drum I also used separately.
The best one was the ddrum3 (the Roland e-set could not beat it)
I cannot understand why they could not make anything like that afterwards anymore.
Yes, the toms with mesh head are better but the ddrum3 brain was just incredible. 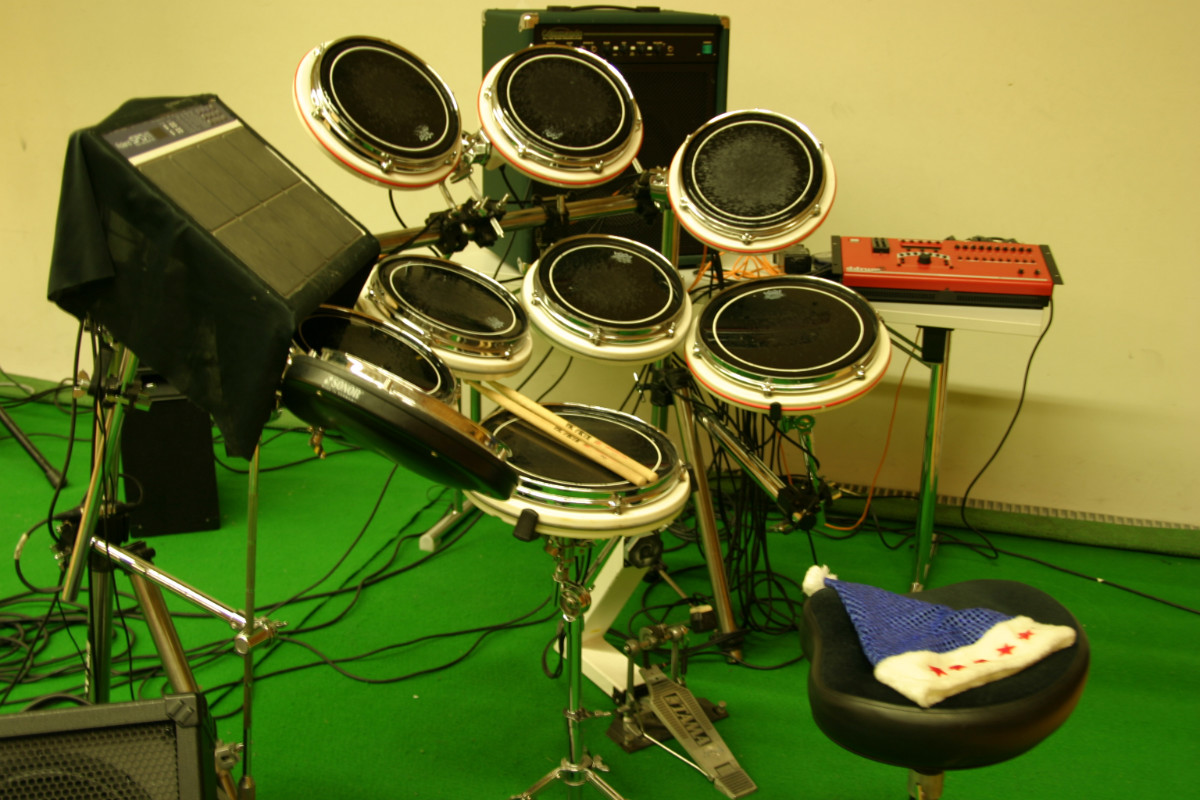 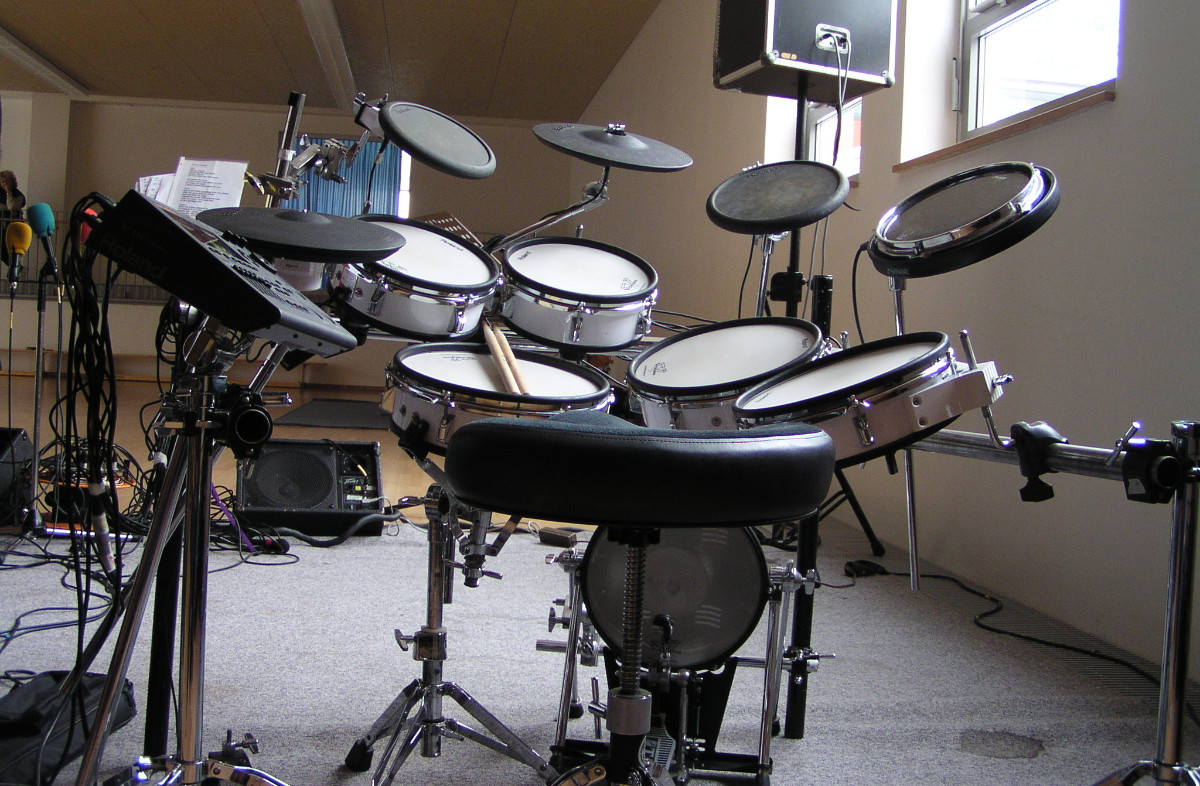 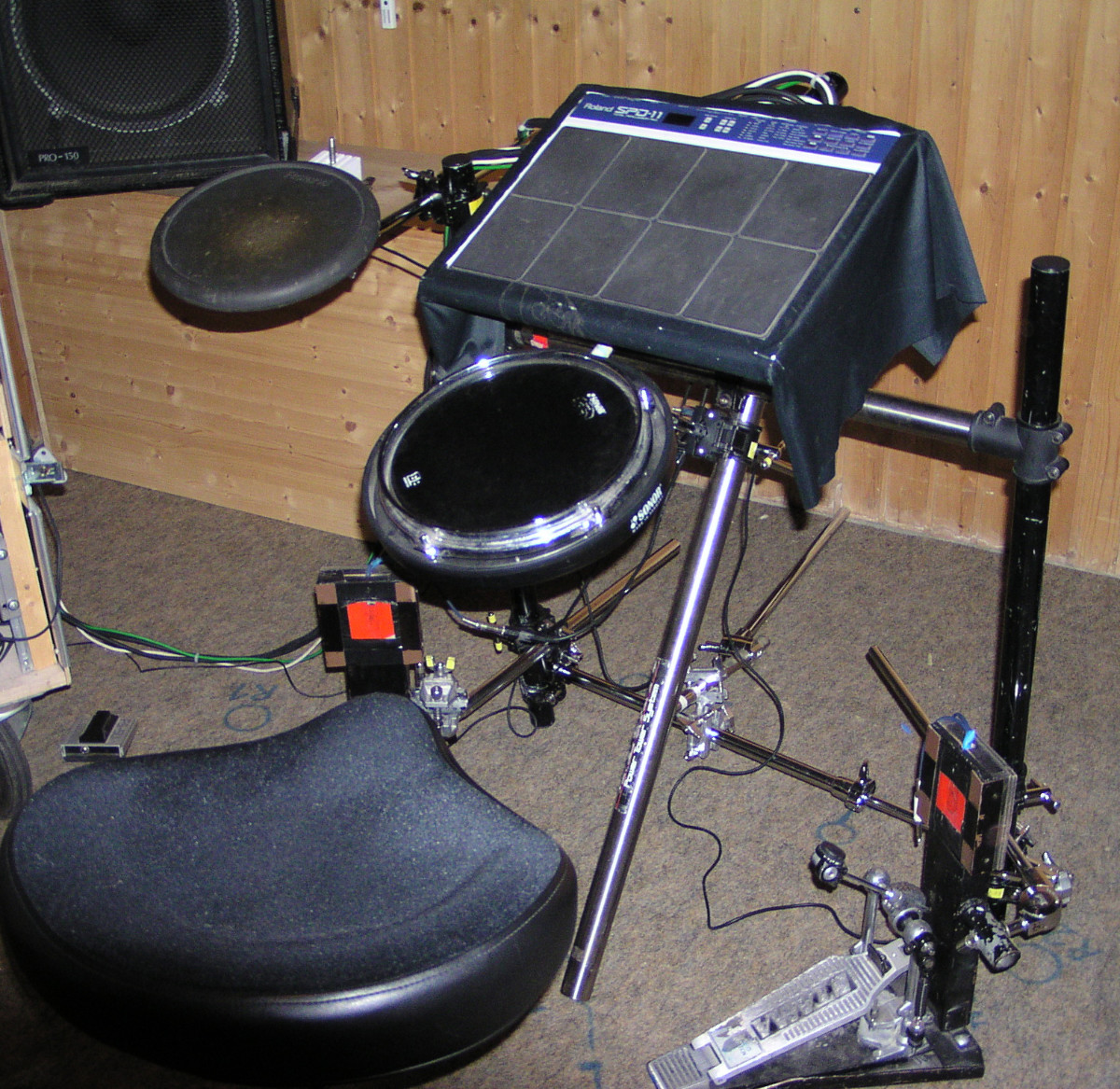 Years later I switched to a drum-tec Sapeli E-Drum.
Very nice look – as like a real drum.
But I would not buy any electronic drumset again.
The drum-tec had a Roland TD12 brain but except the bassdrum and somehow compromised the toms I cannot see anything close to a acoustic set.
Cymbals, HiHat, regardless of the zones, they simply cannot reproduce things you can do on real cymbals.
And the snare also very limited.
E-Drums might be good for certain styles like pop or simple stuff.
But as soon it get’s into jazz or similar, e-drums just don’t work. 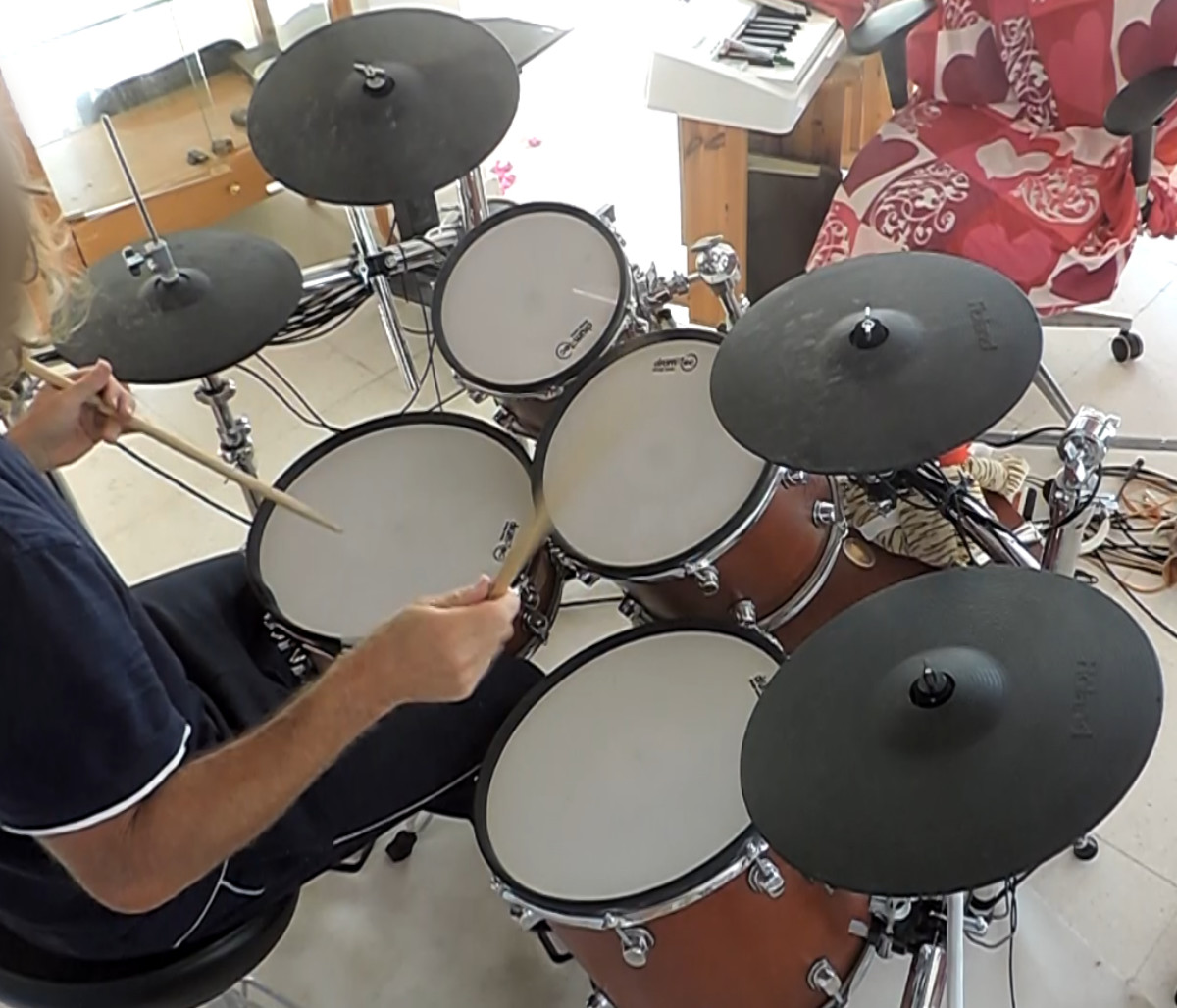 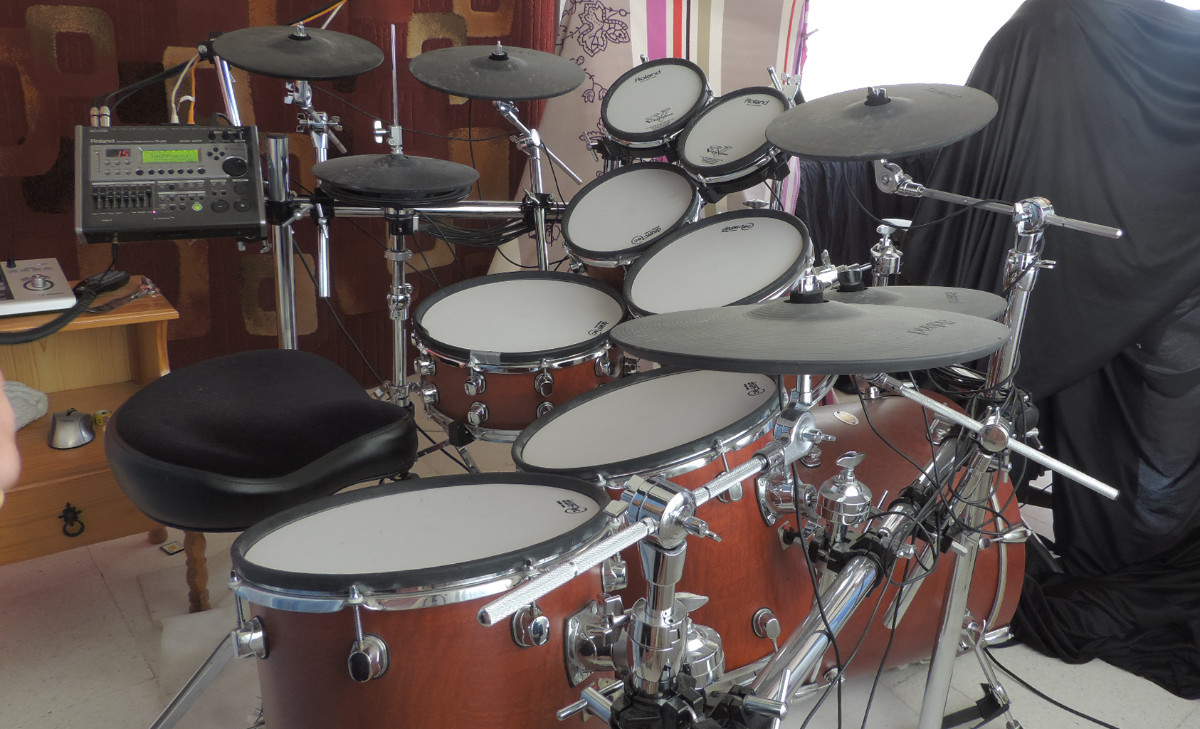 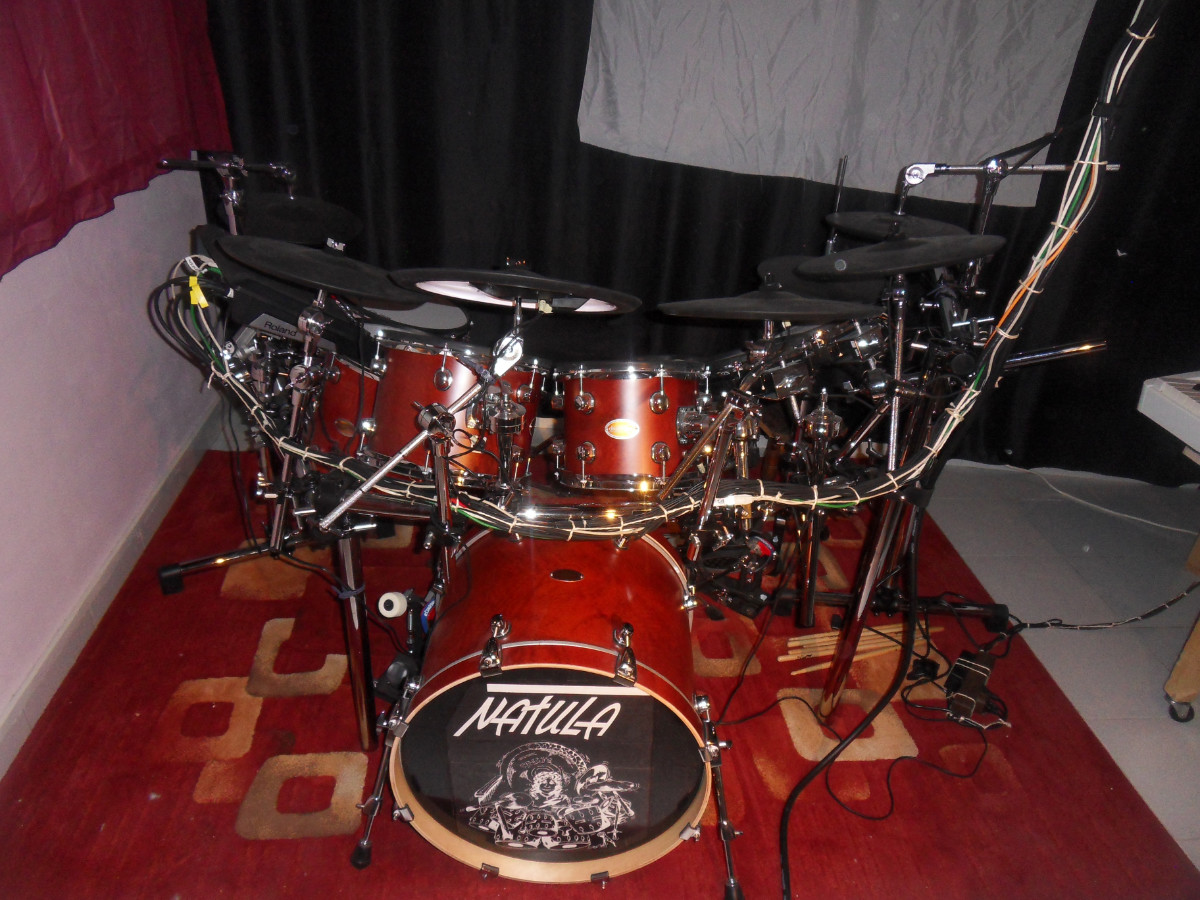 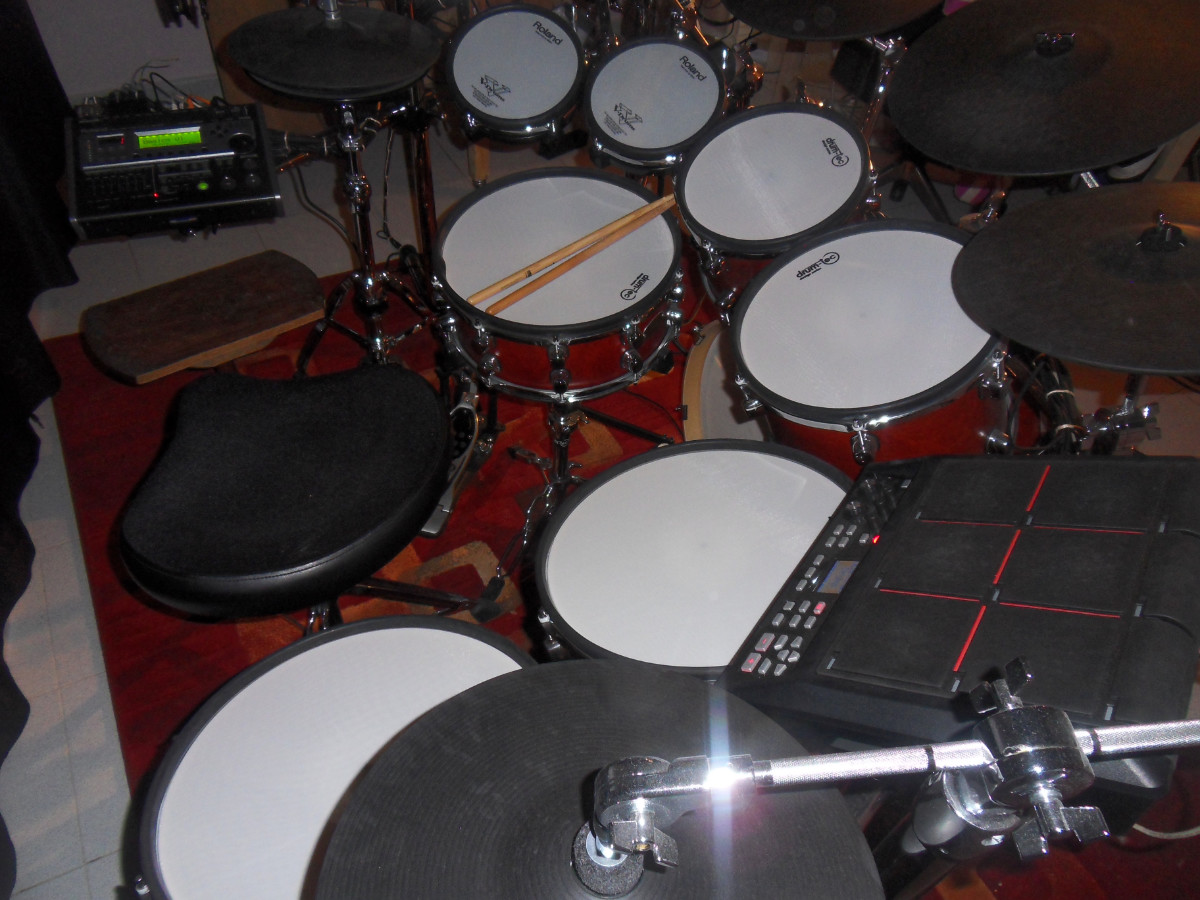 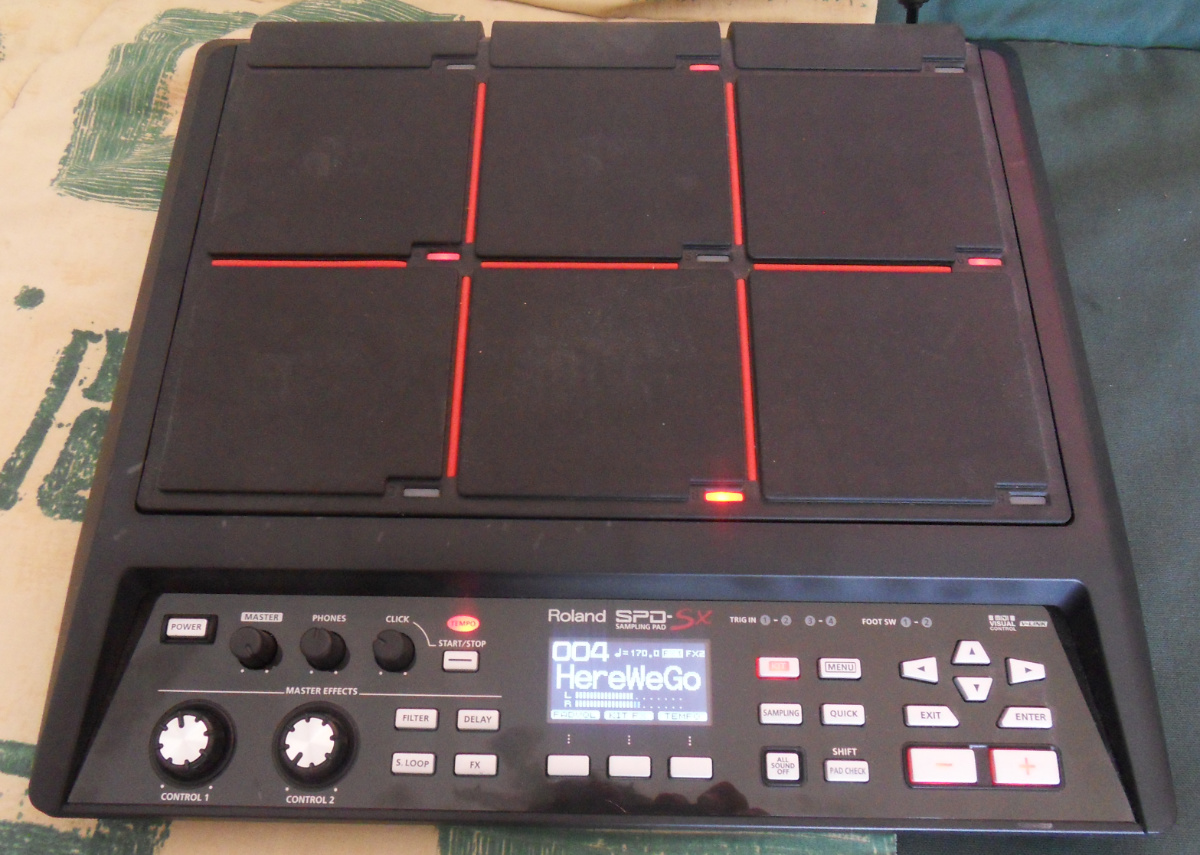 The best piece of all the electronic stuff was funnily the Roland SPD-11 (not the one here on the left).
This former octopad toy was not so nice to play with but the module had amazing MIDI features.
I used it actually as a controller for the studio.
By changing the programs I could change at the same time a lot of different parameters like for reverbs or other MIDI devices.
As a micro set fits into a suitcase it did some good jobs – but usually it was integrated into the big Pearl set.
However, years later as with most electronic stuff Roland discontinued this product and came up with the Roland SPD-SX (see left).
I jumped into this ad bought it but…in a single word I would say it’s just “rubbish” – looks like 6 pads but it has actually 9. The last three are at the top of the thing.
Yes, the response on the pads were slightly better but no MIDI features and even the sounds miles away compared to the SPD-11. 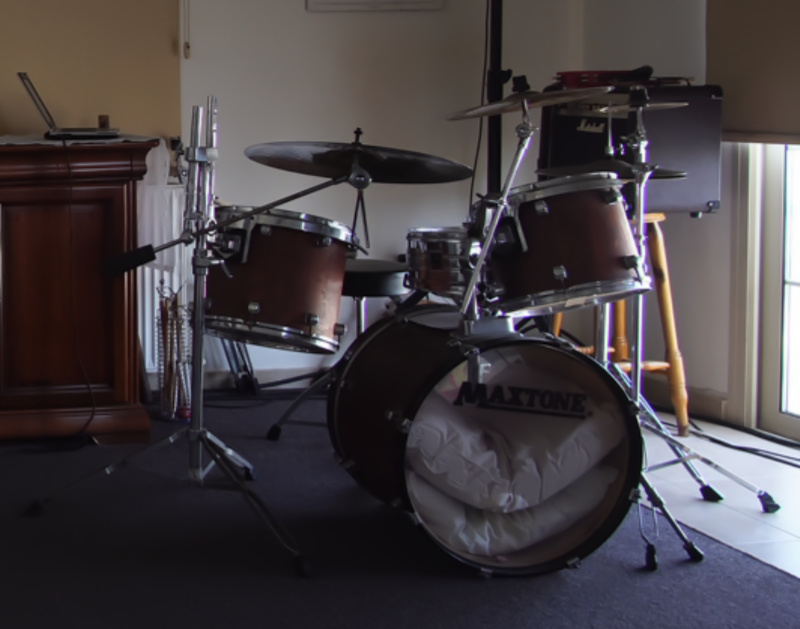 And now?
Yes, I still do play a little bit as mentioned.
However, this is the drumset – small and old.
You can hear this drumset on the latest recrdings.
No, I don’t like the sound but this is all I can do.

Finally … it’s me! Whether I will be able to play again live or not. With the current Corona joke live music anyway died. 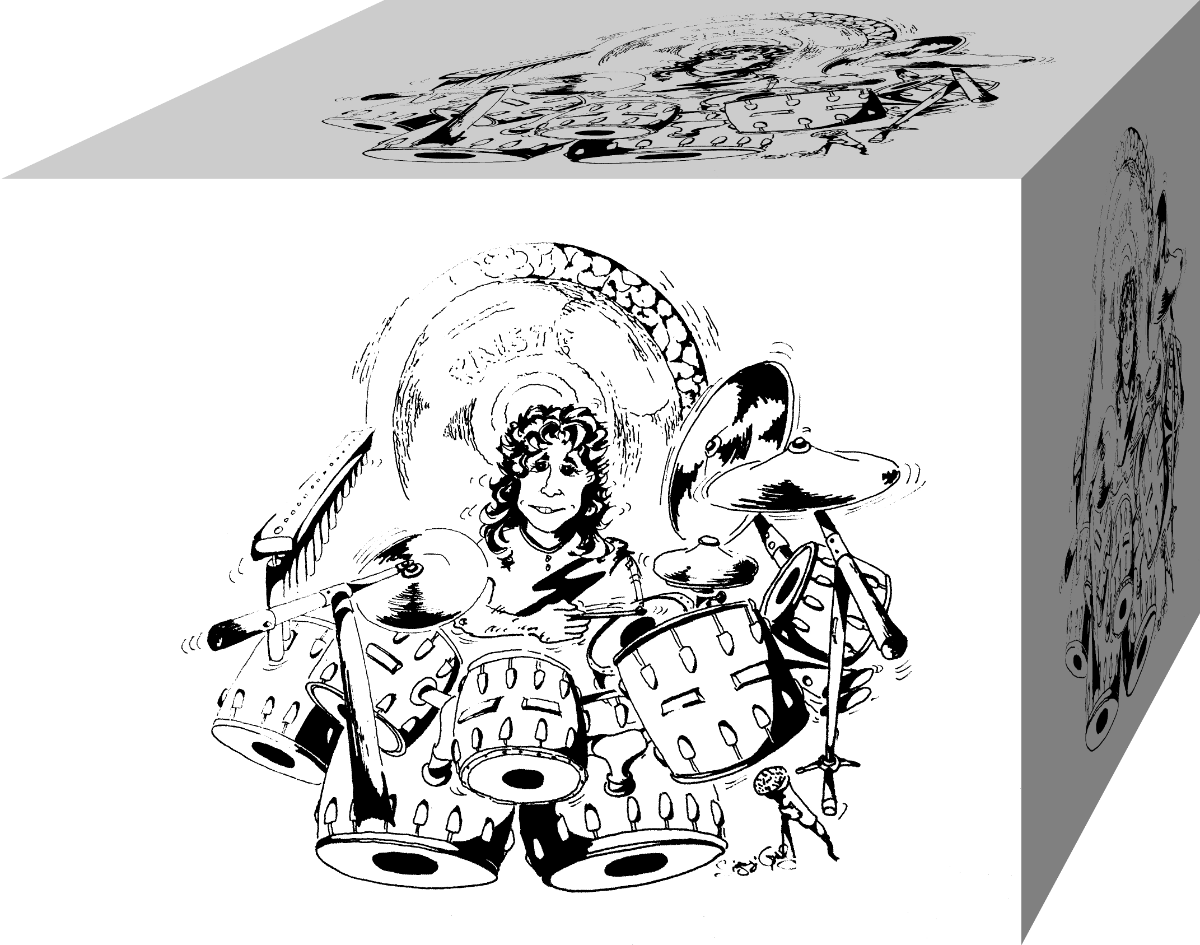 The Music of Drums is available on Pond 5 yet not as a category Drums but as above mentioned in Heartbeat.

Additionally, you can go to the “everything-category”. May you’ll find anything to buy and by this support my work