Note:
Here on this website it’s not a complete transcript of the message with all details, but only a summary with the main subjects and a bit around it.
The complete information is available on the alternative video platforms that you can also watch directly in the video below.
On YouTube I only have a short information video, since some of the words in the message may not comply to their censorship.

You will hear some personal thoughts, looking on this world and all the developments going on from different angles yet with some spiritual discernment.
I don’t claim it to be prophetic, especially the preview into 2023, but who knows…
IF it contains some prophecy we will know in a year – only time will tell. 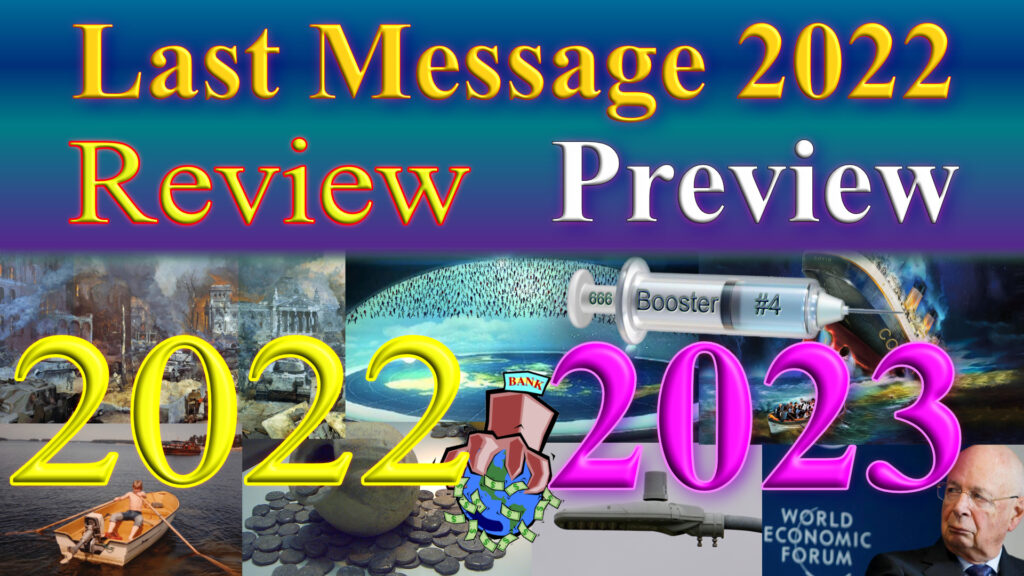 I start with a review of 2022.
Though there could be tons of things to mention I only highlight a few – with details in the video.

No different to 2023, where I expect a lot of things to happen, but also this preview contains only a few things.

– Matthew 24:6
You will hear of wars and rumors of wars. See that you are not alarmed, for this must happen but it is not yet the end.
A lot of it happened long before Yeshua spoke these words.

However, compared to many conflicts the last 75 years Ukraine is surely a different level, since this is a proxy war between Russia and NATO on Ukrainian soil with a real possibility it will turn nuclear.

But what is the truth about Ukraine?
It is known, the first thing that dies in every war is truth.

At the end I would say this prophecy with wars and rumors of wars we can surely say is fulfilled,
though there is still an expectation of a big war in the middle east.

I am sure but at least in more modern history every war is nothing but a bankster war.
And with Ukraine they very likely needed something to distract the people from the coming global financial collapse that is inevitable.
But when speaking about finances now you surely noticed how everything is getting extremely expensive.
If you remember, compare prices from the beginning of 2022 to the end of 2022
A lot of things went up at least 10%
other stuff 40 or even 60%

The only thing that may have become cheaper were smart TV’s or Smartphone or other smart devices to lull the people into the Smart ideology.

You may heard of of places with strong food shortages, where I thankfully can say it did not arrive here yet.
However, I am ready prepared and have some food stocked up.

Revelation 6:5-6:
When the Lamb opened the third seal, I heard the third living creature saying, “Come!” And behold, I saw a black horse.
The one riding on it held a balance scale in his hand.
Then I heard something like a voice in the midst of the four living creatures saying, “A quart of wheat for a denarius, and three quarts of barley for a denarius—but do no harm to the oil and wine

It reflects not my monthly budget but those with a regular income.
But we are not far away from that anymore.

Yet, many millions or even billion people might be in a worse situation.

But as this continues, we may not be far away from saying prophecy fulfilled if not already.

Regardless of the inflation if we will get even a hyper inflation where everything will basically become almost unaffordable:
But the price for salvation is still free, yes, completely free and will remain free until the day when the doors of the ark are closing.
Yeshua paid for our sins in full with His own blood an we can’t add anything.

So as the year 2022 is coming to an end, one day the age of grace one day will close – then all money, gold and silver will not help.

Well, fraudulent elections is nothing new under the sun, that happens everywhere since decades if not centuries – Name it rather “selections”.
This digital age makes it only easier for the puppet players in the background to twist the numbers in the digital world.
Democracy I see anyway only as a label to make the people believe we have a choice when indeed we don’t.

For those who listen, watch or read prophecies may realize something very, very odd.
There are voices who claim that there will be a great overturning and I think especially the US where so many pastors and prophetic voices are still saying America will come back bigger & stronger than ever before.
America will be great again and so on.
IF we only get Trump back in office or only if we get the Republicans or the right party in power in Washington….

Then on the other side the “small village prophets”, say basically the opposite:
It’s done, it’s over, America will be destroyed because of her sin…

So will something of this happen in 2023?
Only time will tell…

Both prophetic camps speak about “soon”.
Soon the overturning of the wicked, soon the destruction.

How soon the one or the other will happen is the unknown elephant in the room.

Additionally, how does corruption play into it?

With so many people being injected with that certain or somehow unknown messenger…
What about their babies?
Will they still have a normal DNA will they be corrupted through the parents “crispered” DNA?
Like in the days of Noach, those before the flood?

The one camp say, the rapture will not happen before the last 7th trumpet, basically at the very end of the big tribulation with the physical return of Yeshua.

The other camp say, it is super close, and it will happen at the beginning of the big tribulation.
Who will be right at the end?

7 Year of Big Tribulation in midst all modern Technology with 5G, special cameras, drones and all other surveillance technology?

The camp who say there will be a pre-trib rapture of what is called the bride.
How many and who will make it?

In biblical history there have been people who got taken out of this world alive.
One is Chanoch, the other EliYahu by a fiery chariot.
Is this possible today again?

Lot got taken out of Sodom and Gomorrah.
Noach sailed out of the destruction by the flood.

Questions to count:
How many are truly righteous today?
How much sin is within the church?
How many people do really live a holy life?
How many have bowed their knees to the “Josef Mengele Serum”?
How many are lukewarm?

How many may take notice of a pre-tribulation rapture?
If so, how many will be left behind?

You can answer these question on your own.

End of Next month there will be another meeting of the Wicked Evil Forum in Davos, Switzerland where the Elites, Big Media, big liars, big global, big corporations and organizations come together to discuss about their next steps into their totalitarian new world order:

The one word that is common in every theme, is the words “New System”.
What is the New System?
My opinion according to my understanding in the Agenda 21 and Agenda 2030:
A totalitarian One World System (government) where a very small Elite rules in a 94% depopulated world and the rest are slaves.
Or in other words: You own nothing and be happy!

Does the WHO with the Gates of Hell foundation have something else in their pocket for 2023?
I would not be surprised.

Watch no further than to Israel and the middle east – the center of biblical prophecy.

Subject #7: My hope for a big harvest:

I hope for 2023 many will come to the conviction of sin and ask for forgiveness and invite the Lord Yeshua into their hearts to be their personal Lord and Savior to be born again and so finally find eternal life.
Every soul counts.

Links to the Videos on different Platforms – you can decide which one you prefer:
Bitchute

Or watch it directly here on Rumble